MISSION AND HISTORY
Children love to sing. They are capable of performing at the highest, even professional level. They have the ability to sing beautifully, in tune and, most importantly, with the passion and joy that only children can have. All they need is a little help. The Alla Polacca Children and Youth Choir is an educational endeavor that provides unique musical training experience for children. Our choristers' talents and musicality are nurtured, their voices are trained, they are taught correct diction and musical expression. We aid harmonious growth - in terms of both musical and personal development of our vocalists.

Alla Polacca Children and Youth Choir is affiliated with the Teatr Wielki/Grand Theatre - Polish National Opera in Warsaw. The choir consists of 200 choristers performing in four age groups (singing kids, children, teenagers and chamber ensemble). The choir was founded three decades ago by Sabina Włodarska, a recognized music educator and student of maestro Stefan Stuligrosz. In 2014, Anna Bednarska took over from Sabina Włodarska as Alla Polacca's conductor and artistic director.

Alla Polacca Choir participates in concerts, operas and other musical projects staged at the Grand Theatre. Its members take part in national and international workshops and competitions, reaching for the highest awards. Alla Polacca Choir performs and tours extensively - both in Poland and abroad.

Alla Polacca's repertoire spans all epochs and styles, including a capella pieces, works with orchestra, harp, piano and organ accompaniment. The choir has recorded many works of Polish contemporary music for the Polish radio and television archives. The choir has also released 18 albums.

In 2016, Alla Polacca chamber ensemble won the Grand Prix at the XIX Cantio Lodziensis national choir competition in Lodz. The choir also prepared an interactive family Hanukkah concert for POLIN - the Museum of the History of Polish Jews that same year.

In 2017, Alla Polacca chamber ensemble won two golds at the 52 International Choir competition in Miedzyzdroje (in Sacral Music and Contemporary Music categories) combined with the Special Jury Prize. That same year, the choir performed at many cultural events and places such as: the Afrykamera International Film Festival closing ceremony (singing traditional songs of Africa), the Matsuri - Picnic with Japanese Culture organized by the Embassy of Japan in Warsaw (singing children songs in Japanese), the Supreme Administrative Court in Warsaw (singing traditional Polish patriotic songs) and the II Spring Festival of Choirs organized by the University of Warsaw. Alla Polacca choir recorded a version of The Beatles' All You need is love hit to be featured in a nationwide advertising campaign for Orange brand and could also be seen and heard on stage at the Teatr Wielki - Grand Theatre in Warsaw as the Forest Choir in A Midsummer Night’s Dream production. The crowning of the remarkable progress made by the choir over the last two years was represented by Alla Polacca's original concert Youth can sing, performed with Sinfonia Varsovia Orchestra and staged at POLIN Museum in Warsaw.

In December 2017, the Alla Polacca choir released the album "Młodość ma głos". The recording was made in Studio S1, a Polish Radio station named after W. Lutosławski, in Warsaw. The album contains eighteen works performed by a children's youth and chamber choir. You can listen to, among others, A Wanderer's Song by Szymon Godziemba-Trytek, a composition for the acappella children's choir, which was awarded in the 13th edition of the Composer's Competition named after T. Ochlewski in 2015. The premiere of this work, performed by the Alla Polacca Chamber Choir, took place at the 52 International Festival of Choirs in Międzyzdroje in 2017. 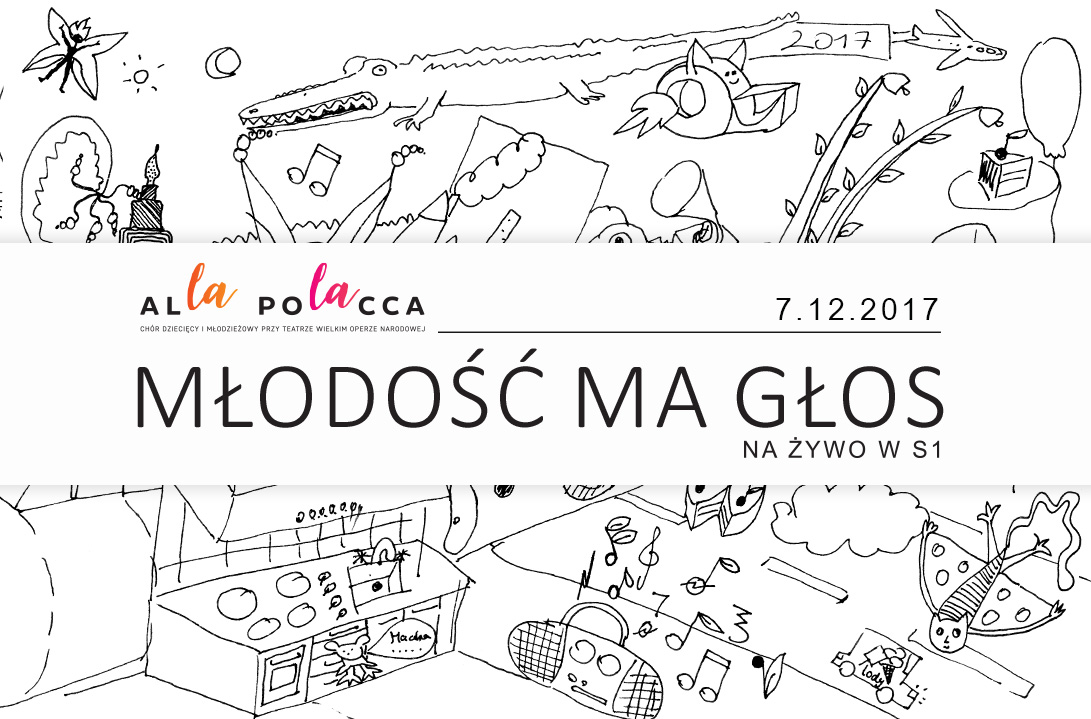